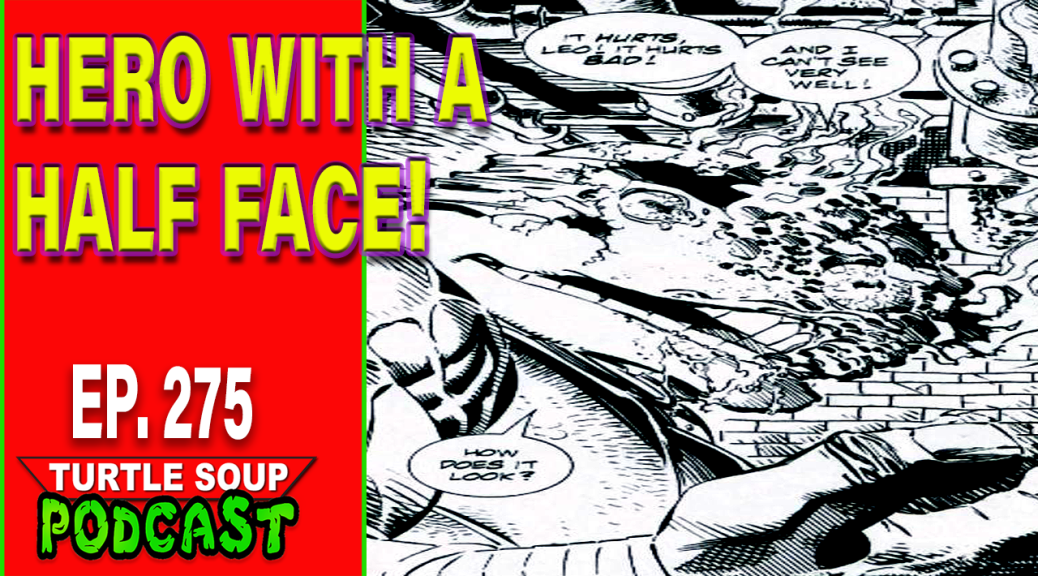 Welcome to the live stream recording of Episode 275 of Turtle Soup Podcast! On this thrilling episode we begin our deep dive on the wildly divisive Teenage Mutant Ninja Turtles Comics Vol. 3 from Image Comics!

This is something we’ve been looking forward to since the beginning of the show. This time in TMNT history is when I think a lot of fans who grew up with the cartoon began to find other interest catch their eyes and divert them from their evergreen true loves. This is probably why an effort was made to make this series more of a “risk taking” run on the Turtles comics. This is also akin to when your favorite unsigned band gets signed to a record deal with “major” indie label. Image Comics was that label that carried so much promise, but as we comic fans well know, “with great power comes great responsibility” and the TMNT were a powerhouse property to be responsible for.

For their first official full on take on the Teenage Mutant Ninja Turtles, Image comics went with black and white interiors. This is a well treaded path for the TMNT and oddly enough works surprising well for them. The art is very nice and cool but suffers with so much detail that its kinda hard to read or make out what you’re actually looking at. This issue pulls no punches. First page is a splash page of Donatello being blasted by an explosion during a birthday party thrown by Splinter for his sons the TMNT. We soon find that this takes place in the lair and the party is being crashed by violent cyborgs. The turtles are quick to make jokes as well as subdue at least one of the cyborgs. Then a mysterious woman clad in warrior leather attire with a syringe gun that was apparently used on Master Splinter leaving him incapacitated and has a knife to his throat. We find out her name is Pimiko and she seems to be the leader of this cyborg militia. The intruders take off with Donatello and Splinter and head to the street. The rest of the TMNT follow to find that the cyborgs and Pimiko have a helicopter and take off with Spinter and Donatello. Eventually, Donatello wakes up after having a fever dream about the birthday party that preceded his current status. Upon waking up he quickly makes a frantic escape to find that he was in a helicopter and now is plummeting back to the earth. Thankfully he’s not alone and managed to knock one of the cyborgs out with him. Back with the rest of the TMNT in the lair, they start investigating the remains of one of the cyborgs that was left behind. Apparently, its still functioning and right before Raphael smashes it even further, it manages to plasma blast Raphael in the face. Then we see that while this was transpiring, Splinter took a trip on the astral plane and visits his son Leonardo. Splinter explains the situation to Leo and then Pimiko notices that “the rat” is apparently a high level ranking ninja master and is on the astral plane. Splinter bids farewell to his son as he is discovered and presumably knocked unconscious. And that’s issue 1 of vol. 3 of the Teenage Mutant Ninja Turtles from Image Comics.

Lettuce know! Email us at turtlesoupshow@gmail.com