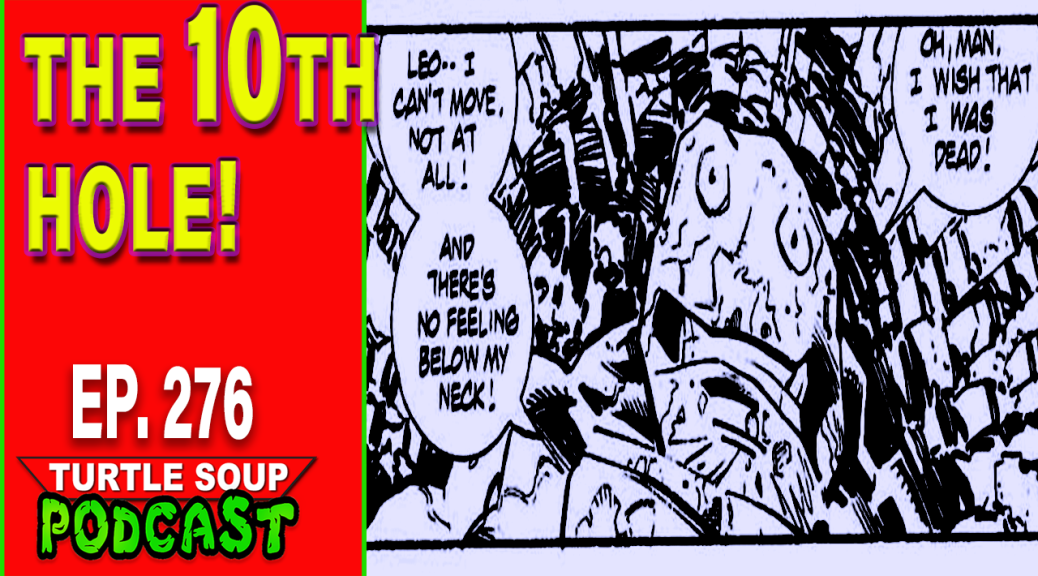 In this issue, we catch up with Donatello who is still falling from the helicopter after escaping his captors. He ends up tussling with the cyborg who fell out with him and that ends in him accidentally triggering his gun that hits him in the head. Leaving Donnie to continue the rest of the fall to the city street below alone.

We follow the helicopter to this palace that appears to be the headquarters of the Dragonlord. Pimiko and the remaining cyborg take the now unconscious Splinter and place him in a cell within the headquarters. We’re then introduced to a character who is a shark man type creature named Mako. Mako and the cyborg get into an argument and Pimiko ends up stabbing the cyborg in the throat and placing him near Mako’s cage and encourages him to eat to his hearts content.

We then see Leonardo, Michaelangelo and Raphael relocating their lair since their previous lair has been compromised by a new enemy. They end up inside of a mausoleum in a graveyard that they decide to use for a new lair. Michaelangelo is tasked with looking on the internet for any information about this so called Dragonlord. Raphael heads out to source some information from his contacts in the Foot Clan. Before he leaves tho, Leonardo gifts him one of Casey Jones’ old hockey masks to cover his now scarred face. Then Leo proceeds to attempt to achieve transcendence to the astral plane in hopes of contacting Splinter.

As Raphael makes his exit we see that they are not the only beings alive in the graveyard, as one of Pimiko’s kuniochi named Angel is keeping tabs on the TMNT and informing her boss on their situation. Cut to Pimiko who is in the presence of the infamous Dragonlord! Who she just informed that the cyborgs we saw last issue and the beginning of this issue are a waste of money as they are insubordinate and incompetent. With this new information, the Dragonlord is on the phone cancelling all funding of any cyborg tech.

The rest of the scene is very similar to every story ever told about Marvel Comics Wolverine and his time with Weapon X and basically his adamantium origins. Only, instead of Marvel Comics Wolverine, we get a character called “The Weasel” who turns out to be a mutant and not an anthropromorphic creature. The Dragonlord has no interest in this being and as a result, The Weasel attempts to attack The Dragonlord but is beheaded by Pimiko. She then proceeds to inform The Dragonlord of the TMNT’s situation and is told to attempt to capture one of the other turtles since she lost Donatello.

Raphael returns to the new lair and picks on Leo for trying to get to the astral plane. Then Raphael goes over to Mikey to compare notes and they find out that there is some land associated with the Dragonlord and this coincides with what they know of the location that Splinter described being taken to and Raphael’s intel from his connect in the Foot. They go to tell Leo of their findings but he has now actually ascended to the astral plane.

Leo upon arriving in the astral plane is greeted by Donatello who has also managed to make it there. They converse and Leo follows Don to where is physical body is. Turns out that Donatello landed on his shell and has no feeling below his neck. Its at this point that Raphael gets 3 shurikens in his shell and we find out that Pimiko and her Kuniochi have invaded their new lair and can’t get Leo out of his trance.