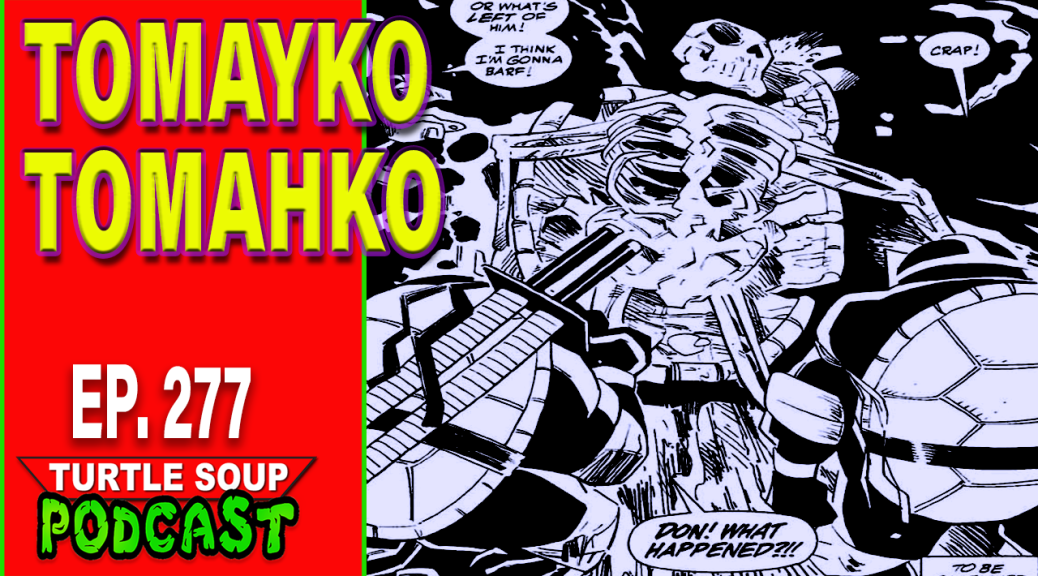 Welcome to our live stream recording of episode 277 of Turtle Soup Podcast! On this episode we review the 1996 Image Comics Teenage Mutant Ninja Turtles vol. 3 issue 3! On top of that we have fresh news regarding Splinter being announced as the newest playable character for the forthcoming Teenage Mutant Ninja Turtles – Shredder’s Revenge, video game!

We start things off with taking a look at the TMNT – Shredder’s Revenge video game trailer revealing none other than Master Splinter as another playable character!

Splinter looks fantastic and appears to be based on his 1987 Animated Series appearance.

Following the news we get into the real meat of the episode! Our review of the 1996 Image Comics Teenage Mutant Ninja Turtles Vol. 3 Issue 3!

This issue opens with Donnie making his decent from Pimiko’s helicopter to the ground below and hoping for the best. Then we see Pimiko deliver Master Splinter to Lord Go-komodo the Dragon Lord’s palace. Followed by her presumably killing the remaining cyborg brute that accompanied her to the TMNT’s lair in issue one. She stabs him through the throat and then tosses him over to a caged shark man named Mako, who begrudgingly feasts on the half man half machine.

Splinter is able to make one last trip to the astral plane to direct Leonardo in the direction of home as he’s been lost since Donnie left him there alone. Splinter makes an ominous remark about beings on the astral plane that want Leo’s fear or something like that. Splinter is brought before Lord Go-Komodo and has his ninja status tested to Lord Go-Komodo’s delight. Splinter, ever the gentleman, wins Lord Go-Komodo’s respect and the two have a very lengthy intelligent conversation. Lord Go-Komodo explains that he’s looking for mutants that can unleash the beasts within as to unlock the dragon beast within himself.

Back with the Turtles, Pimiko and her Kunoichi are attacking Leo, Raph and Mikey in their newly set up lair in the graveyard. Leo is still out of commission as he’s still on the astral plane peacefully sitting there unaware of what’s happening around him. Raph quickly leaves Mikey to deal with the rest of the kunoichi while he takes on Pimiko one on one and divided they fall. As Pimiko starts to gloat over her victory, Leonardo wakes up and kicks ass and the female ninjas depart. Mike and Raph want to follow them but Leo says he knows where Donatello is and so Raphael runs to get a Triceraton flying car ship thing that Donnie had been working on and they make there way to the city to find Don.

While Splinter and Lord Go-Komodo are making their way through the palace and talking, they start to smell blood and death in the air. Then we see that the smell is coming from the mouth of the aforementioned shark man Mako who attacks them.

Back with the TMNT, they find the spot where Don should be and after searching a bit they find that all that remains is Donnie’s skeleton.

What did you think of seeing a TMTN’s skeleton?

Did you like how Splinter was handled this issue?

Do you think that Raphael actually has a thing for Pimiko?